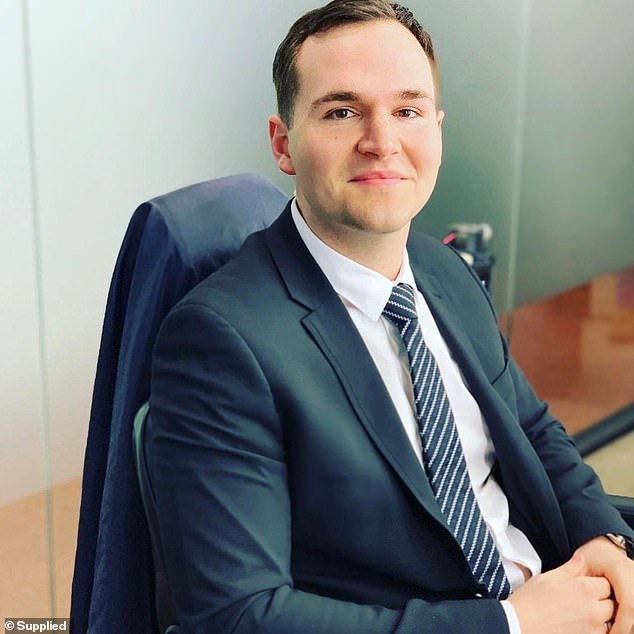 A Sydney-based property investor has told people struggling to break into the market to stop ‘complaining’ by blaming the housing crisis on a ‘victim mentality’.

Eddie Dilleen, 30, has built a portfolio of 42 properties across New South Wales and Queensland – 20 of which have been purchased in the past two years alone.

He bought his first property while working a low-income job at McDonald’s while going into debt. He used the same system to continue building his real estate empire.

The controversial strategy sees investors draw equity from their other properties to fund the initial costs of buying another.

Eddie Dilleen, 30 (pictured), has built a portfolio of 42 properties across New South Wales and Queensland since buying his first investment property while working a low-income job at McDonald’s

The system has come under heavy criticism for allowing investors to ‘store’ properties while people looking to buy for the first time struggle to break into the market.

However, Mr Dilleen said the property industry ‘needs’ people like him because ‘the government cannot provide housing for everyone’.

He added that new owners are lucky because they are exempt from certain costs associated with buying a property such as stamp duty – which investors are not.

Instead, Mr Dilleen believes the housing crisis comes down to a “victim mentality” and a blame game – not investors grabbing already limited property stocks.

“People who say it’s the investors’ fault, prices are going up, I think they’re looking for someone to blame. It’s a victim mentality. If things are difficult, it must be someone else’s fault,’ he told News.com.au.

‘It’s human nature. It is easier to complain than to do something. Pointing fingers at someone else is easier than doing something to improve your situation. In my opinion, you can complain or you can do something.

Mr Dilleen insists Australia’s housing crisis is caused by a ‘victim mentality’ and told people struggling to break into the market to stop ‘complaining’.

Mr Dilleen said he witnessed first-hand the ‘victim mentality’ growing up in a low-income family living on a housing commission property in Wilmot, Sydney’s west.

He claims no one in his family had owned an investment property, so he decided to break the cycle.

Now the real estate kingpin is buying three more properties to take his portfolio to 45, but doesn’t see himself breaking his “addiction” until he’s the best in the game.

“I don’t think I’ll ever stop. I’ll have 1000 properties. It’s a healthy addiction. It’s like doing the next thing when you hit a milestone. You go after the next and the next. I want to overtake everyone,” he said.

Mr. Dilleen has been able to keep his assets afloat by receiving loans from third-party lenders and charging his tenants high rent compared to his mortgage payments.

He believes anyone can become a real estate investor as long as they are not afraid of racking up significant debt and can control their spending habits.